My Band Roots - My Senior Project 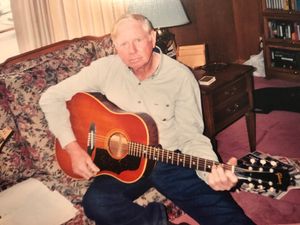 There I was, my senior year in high school.  We finished up with the first semester and came back into new classes.  One of those classes was English Lit.  The teacher was Mrs. McCutcheon.  She ended up being one of the best teachers and most influential that I had ever had.  We found out, soon after starting that semester, that we would be doing something new, and would be venturing into uncharted territory.  We had to do “Senior Projects!”  What?!  Senior projects?!  I just wanted to keep my head down for one more semester and graduate, but now I had to do this.  I went on for longer than that, but you get the picture.

After I calmed down and accepted my fate, my mind cleared, and I’m pretty sure I was the first one to come up with what my senior project was going to be.  I was going to learn how to play guitar.  My Pa played guitar, and I always thought it was so cool seeing him get up and perform at church, and on stage at a place called “The New South.”  It was a little honky-tonk type place there in La Grange.  I went home that day and asked him, and of course, he said he would. 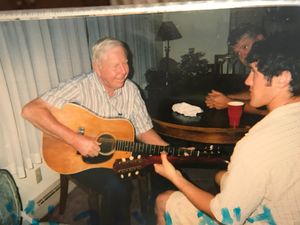 I worked for months learning how to play a few chords well enough to play and sing at the same time.  I remember it being one of the hardest things I had ever done, up to that point.  Pa told me that he didn’t think I would stick with it.  I’m not sure if he was doing that to motivate me, or if he truly felt that way, but I worked hard at it.  He started teaching me a few chords, but one of them was really difficult for me, so we switched up the song and the chords so that I could make sure to get it right in time.  I learned the chords of D, G, and A initially.  I learned more than those three eventually, but those were the ones I HAD to learn to be able to play the song at the presentation.

It all culminated to that one evening, sitting in front of three teachers and a handful of peers, who were also there to give their presentations.  I was way more nervous than I thought I would be.  What if I wasn't good enough, or if they laughed because it was an old country song and not a more popular song?  Somehow, I was able to push all of that nonsense down and I pushed through the song.  I sang and played, “When Did You Stop Loving Me,” by George Strait.  Afterwards, they all clapped and cheered for me.  I was over the moon, excited and relieved that I made it through without screwing up.